The Lord of Conspiracy 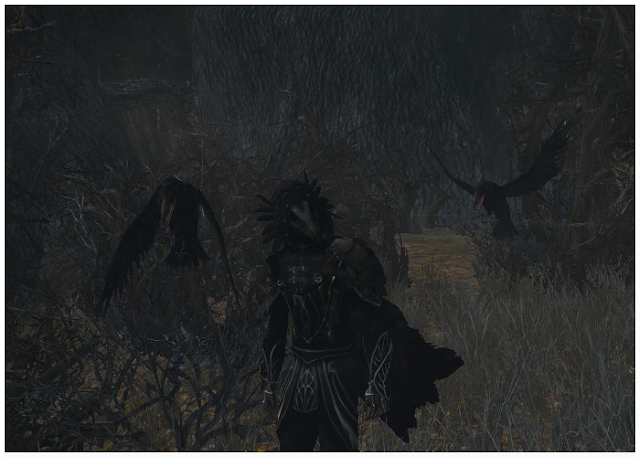 Now while I don’t often make festival outfits, in fact I don’t think I’ve ever made an outfit specifically for a festival in LOTRO ever. And yet here one is… let me tell you why, quite simply the Mask and Cloak of the Autumn Wanderer inspired me unlike any festival cosmetic ever has. This maybe because they look like an updated version of the older Raven Festival Mask and Cloak of the Raven which were the Centre pieces for my very first Cosmetic outfit about two years ago and so in a way ‘The Lord of Conspiracy’ pay homage to not only my first days of LOTRO but also my first forays into it’s Cosmetic system.

One thing I do for each of my LOTRO mains (Tuilinel, Yaaraen, and Niereil) is create a unique background of each of them detailing their place in the legendarium of Tolkien. Tuilinel is the Spymaster of Imladris, a councillor to Elrond and his chief Archivist, but his spies are not Elves, Men or Dwarves, instead he commands Folks of Sparrows to watch Rivendell’s borders and those that walk therein. In Fact in my previous post ‘The Spymaster of Imladris you may notice Glamorel (meaning Echo) in some of screen shots, and while my Tui is wholly on the side of the free peoples what would have happen to him had he been captured and forced to the Dark lords biding, with his talent turned to evil and his Sparrows replaced with Ravens and Crebain… perhaps instead of collecting truths he would spread lies. 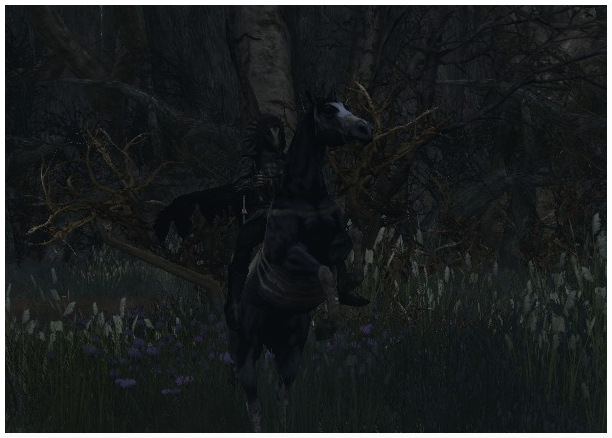 This outfit began out my want to wear the Cloak of the Autumn Wanderer as part of one of my new Grey mountain’s inspired outfits, but I couldn’t get it to look right and I’ve put that project on hold for now, instead I thought why not make and Evil Tuilinel outfit for Halloween, you see I’m not one of those people you go as a pirate or a vampire or a goat for Halloween I go as a pirates parrot or as a vampire priest who kills other vamps or a goat. I put my own spin on Halloween so why not put a new spin on my Tui in the spirit of the season. 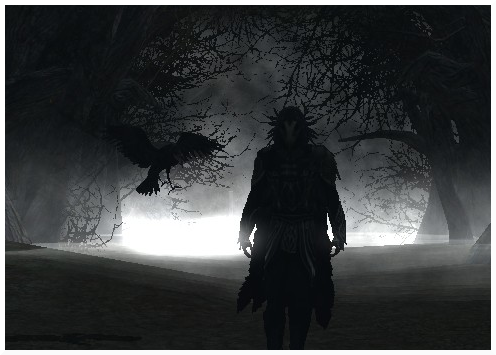 Having set on the Cloak and Mask of the Autumn Wanderer as the centre pieces of this endeavour I moved on the Chest piece I wanted something simple which wouldn’t take away from the Cloak or the Mask something which complimented them without competing with them I first tried a number of different robes but none felt ‘right’ so I moved on to chest and leggings combos, I tried a number of more rustic looking Chest pieces with fur or feathers however none gave that spooky corrupted elf feeling so I dipped into my knowledge of Elven Style cosmetics and went to my wardrobe which is full to bursting with elf stuff and things and pulled out a few of the old Barad Guldur Mirkwood raid pieces which once dyed black gave me my desired effect. Now the shoulders were another matter entirely I tried all the options in my Wardrobe and none of them worked so I went to my vault and then to the Skirmish camp and then to Harndirion but nothing was right either it didn’t dye black enough or it was too distracting and took the focus away from the Mask, so I went to the one place I always forget I store stuff, to my House where in the Chest I can find all the Dunland sets in their entirety along with a number of other random pieces which have moved out of my wardrobe where I found this simple should piece which not only lacked distracting details but also covered some of those on the chest piece which really made the outfit feel oppressive and tainted as if even Tui’s elven nature was being shrouded in darkness. 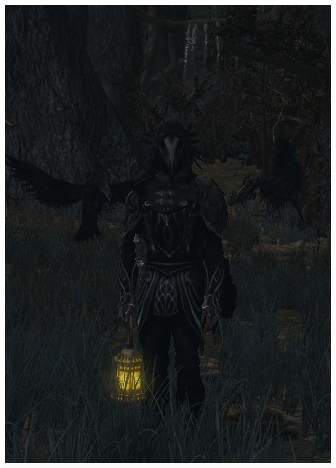